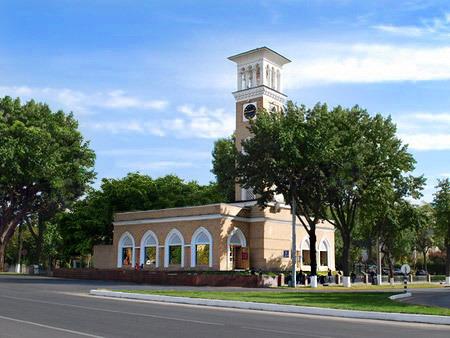 The symbol of Tashkent – a high tower, in which there are big chimes. It was erected in 1947 and began working on April 30 of that year.

There is amazing story about Twin Clock Towers that I.A.Ayzenshteyn a watchmaker and resident of Tashkent, has brought the tower clock mechanism from Germany after World War II as a trophy. This clock hung on the tower of City Hall in the city Allenstein in East Prussia. City Hall was destroyed but the mechanism of clock remaned. Aizenshtein put an idea to build for the clock tower in Tashkent. The idea was accepted by the City Administration, which then announced a competition that included various projects for the town clock tower to be built and the first tower was erected according to the project of the winner.

In 2009 there was erected the second tower, an exact copy of the first. Today the complex consists from two towers which embraces the aesthetic of the past and the dynamic present. Both combines modern and traditional elements of the Uzbek art.

The newly constructed Tashkent Twin Clock Towers houses a showroom displaying ancient and contemporary jewelry masterfully created by members of crafts dynasties. The old Twin Clock Tower complex offers to visitors unique samples of traditional Uzbek arts and antiques. It includes a colorful collection of ethnographic clothing, suzane, carved wood items by masters of Tashkent and Kokand schools, ceramics, paintings, and pottery items made by various Uzbek local art schools. Besides in the Twin Clock Towers there is exhibition of works by contemporary artists and designers of 21st-century. These include fabrics, Suzanne and clothing crafted by young masters using restored ancient technologies.Best examples of national handicraft art, antiques, jewelry and works of contemporary painters galleries are located inside both of Tashkent’s Twin Clock Towers.