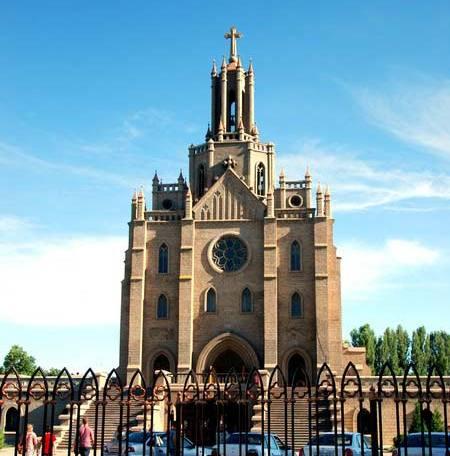 Christianity found its way into the territory of Central Asia in the first centuries AD due to the development of the Great Silk Road. Fugitives, travelers and missionaries were moving together with trade caravans following by one of the most famous ancient routes, and who propagated their religion in the outlandish countries.

However the first Catholic metropolitan cities and archdioceses along the Silk Way were set up much later – in XII-XIII centuries when the Vatican and China established diplomatic relations.

An active propagation of Catholicism in the countries of Central Asian region began in the second half of XIX century and in the beginning of XX century and it was connected with Russian expansion in the East. Thus, according to statistics by 1917 there lived 11, 000 Catholics in Turkestan, 7,000 of which lived in Tashkent. They were Poles, Lithuanians, Germans, French, Letts from among the military men of the tsarist army whom the government sent for servicing rather far off from their native land: to the Far East, Turkestan and Caucasus. There were also many exiles, Western-European prisoners of war and fugitives in Turkestan.

The first official Catholic clergyman in Turkistan from 1883 to 1885 was father Ferdinand Senczikowsky, who made every effort to build a Catholic chapel to hold the masses in Tashkent.

From 1902 to 1917 it was Iustin Benaventura Pranaytis who became a Curator of the Turkestan region. During this period, churches in Ashkhabad, Kyzyl-Arvat (Turkmenistan), Fergana, Samarkand and a temporary church-chapel in Tashkent were built. The construction of the Tashkent Big Catholic Church near the Catholic chapel began in 1912. Soldiers-Catholics many of which were skilled specialists were taking part in the construction of the Church.

The progress of construction work was too slow and in 1917 a revolution began upon which father Boleslaw Rutenis, Pranaytis’s heir was making attempts to finish construction of the Tashkent Church. But he never managed it, due to the change in the political situation in the country, Bolsheviks’ pressure and a shortage of financial funds. Soon, Rutenis being unable to stand such difficulties left the post of Senior Priest. After Rutenis’s voluntary termination of service, the church services for the remained Catholics were held secretly by father Joseph Sowinski. In 1937 he was arrested charged in anti-soviet propaganda and shot.

And what happened to the Church uncompleted? The Church was nationalized in 1925. And during the Soviet period it housed different organizations: hostels of the Electrical Cable Plant and Republican Obstetric School, administration and storehouse of Medtekhnika. The building of the church was reconstructed several times and eventually was abandoned. Naturally, by that time neither sculptures, nor valuables from the church were saved.

In 1976 owing to a resolution of the Government, the building was restored and handed over to the Ministry of Culture of the UzSSR, and in 1981 it received the status of a landmark and historical site in Uzbekistan.

An official activity of Catholic organizations in Uzbekistan only resumed in 1987. A Catholic parish was opened in Fergana first and three years later the Catholic Church was opened in Tashkent, whose Senior Priest became father Kszisztof Kukulka, a Franciscan from Poland, who was appointed in 1997 by the Pope John Paul II to be Ordinary of the "Missio sui Juris" in Uzbekistan. From 1992 after proclamation of independence of Uzbekistan, the Church was returned to the catholic parish in Tashkent. And in January 1993 the restoration of the Church began, whose management was performed by Architect Sergey Adamov and Designer Alexander Ponomaryev; all organizational issues were assumed by Kszisztof Kukulka. At that time, in the course of construction, the old Catholic chapel building located in the House of Polish Society at the construction site was included in the construction plan of the new church. The construction of the Catholic Church of Holy Jesus was completed in 2000, that is 88 years later from the moment of lying of the first foundation stone. The church at once was announced as one of most beautiful and distinguished for the East architectural buildings of modern Tashkent.

It should be noted that decor and interior of the church are very impressive. The church was build in Gothic style, its building interior is lined with marble and granite, its furniture and doors made of fine wood. The candleholders, candlesticks, arty-crafty fence and banisters etc, were made by Blacksmith V. Pilipyuk. The ground floor of the church houses the premises of the crypt-chapel (the same which was built under Pranaytis in the beginning of the XX century), John Paul II and St. Antonio Halls.

The first floor houses a solemn big hall where Sunday masses are held. An honorable place in the hall is devoted to an altar with a tabernacle, decorated with 2-m sculpture of Jesus Christ. Rows of massive wooden benches for the congregation stood in spaces between the huge columns. There is a 26-voiced organ – a gift from the Bonn Parish of St. Paul under the church domes. The hall is decorated with pictures of scenes from the Bible, colored leaded lights and Catholic symbolic. To the right of the altar there is a confessional where the Catholic may have the sacrament of confession.

The masses in the Tashkent Catholic Church are held regularly in 4 languages – Russian, English, Korean and Polish.

Along with the construction of the church in Tashkent in the beginning of 90-s of the last century, Catholic parishes were opened in other large cities of Uzbekistan – Samarkand, Bukhara and Urgench. The growth of the Catholic congregation in Uzbekistan and efforts of the Tashkent Catholic clergyman were discerned in the Vatican and in the year of 2005, the Pope John Paul II upgraded the status of the "Missio sui Juris" in Uzbekistan to the Apostolic Administrature and appointed the first Bishop in Uzbekistan - father Erzy Maculewicz. Nowadays the Senior Priest of the Tashkent Church is Lucian Szimanski. Catholic clergymen and monastic Franciscan-Brotherhood as well as missionaries from the Order of Divine Love (sisters of Mother Teresa of Calcutta) are permanently serving in Uzbekistan.