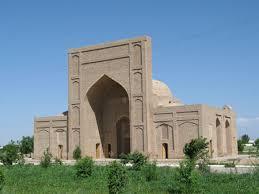 The Kokildor-Ota is mentioned by researchers for its architecture and unusual planning, as a hanaqoh mausoleum of the XVI c. worthy of note. It is thought that the name of the saint buried witnesses about his participation in the rite of cutting the tuft of hair of some believers who gave a vow to the tuft of hair till the time when some definites events took place in their life.

This was portal-domed multi-chambered construction frontal composition with a brick wall. The idea of building a three-stage frontal, open facade, which was used in the complex of Sultan- Saodat, was repeated here too. Its plan was symmetrical by composition: There was placed a deep terrace with a main entrance and large domed hall in the central axis. On their sides, almost parallel, were placed two rooms across the corridor in a mirror composition. Thus, the rectangular entrance led to a central hall and lateral entrances to the joined rooms and corridors that were lateral to them. The decorated apertures of ganch moulding built on the complicated grid of multi-angles, thyroid sails and are remarkable.

The monumental portal of the building was more characteristic of the XV c., that is to say, to the Temurid epoch, than to the architecture of Mawarannahr in the XVI c. In the interior hall gravestones; the largest one belonged to Kokildor-Ota. Researchers have suggested that it could have been redecorated in the epoch of Temurids, probably in the period when remodelling was done to the monumental structures in the complex of Hakim at- Termizi and Sultan Saodat. We should note that the building of Kokildor- Ota is one of the few hanaqoh with a frontal composition in Central Asia, and it is also one of the significant monuments in Termez.We must conclude that the architecture of Surkhandarya, and particularly Termez, took the special place in the medieval architecture of Central Asia.

Due to its geographical position and common historical character, the school of architecture of Surkhandarya, including the group monuments in the Termez oasis, should be grouped with the archi- of neighbouring Khorasan. In both regions, to strong expressive forms was expressed in single-relief decor, which was set on the background of usual, or ornamental wall cladding. The earliest construction of the mausoleum complex of Sultan Saodat featured three-part domed frontally open cult constructions. Some groups of the buildings in the XV-XVII c., of the Sultan Saodat complex, Hanaqoh Kokildor Ota of XVI c. and even raw brick dwellings in some villages of Termez region included two-domed rooms, which were joined by a terrace placed between them. Favourite decorative methods in Termez were laying the main facade out and sometimes the interior walls by flat arched bays in the form of II shape. So, the three-arched bays in the XI-XII c. decorative facades are the mausoleums of the complex of Sultan Saodat's and interior of its northern burial vault, the facades of the mausoleum of Zul-Kifl and the main facade of the mausoleum of Uyk Gumbaz: and six arches decorated the facades of the mausoleum of Khwaja Isa and five arches graced the facade of the mosque in the madrasse of the XVIII- XIX .

Another decorative method used both in raw and baked brick constructions was the fir tree motif, set in the interior of semi-spherical bosoms of the sails on the background of double or simple wall cladding (the mausoleum of Sultan Saodat and Ataulla-Eshon).

Finally, the base-supported three-quarter column used in arched bays was original to this region. Cutting of the angles of prismatic base of the facade showed the effect of the cube mounted on the rib. Such a "diamond-shaped" base was implemented in the mausoleums of the complex of Sultan Saodat in the XI c. and also at the beginning of the XV c. in the interior of the hanaqoh in the complex of Hakim at-Termizi.

Remarkable raw brick construction was done at Termez. Kirk-Kiz was one of the best, a veritable encyclopaedia of the arched aperture constructions of Central Asia. Meanwhile, the latest raw brick structures, of the XVII-XIX c., frequently covered by the vault "balkh", naturally continued the compositional, constructive and decorative methods of the earliest classical constructions.

Thus, the distinguished character of the architecture of the Termez oasis witnesses about the appearance of a highly unique local school in the Islamic period, growing from the fertile soil of the effective implementation of various methods of the previous epoch. Preserved in this ancient town masterpieces of architecture the earliest group of mausoleums of the complex of Sultan Saodat, the building of Kirk- Kiz, the carved ganch decoration of the Palace of Termez Shahs and burial vault of Hakim at-Termizi wittiness about the high art of the architects and masters of medieval Termez.