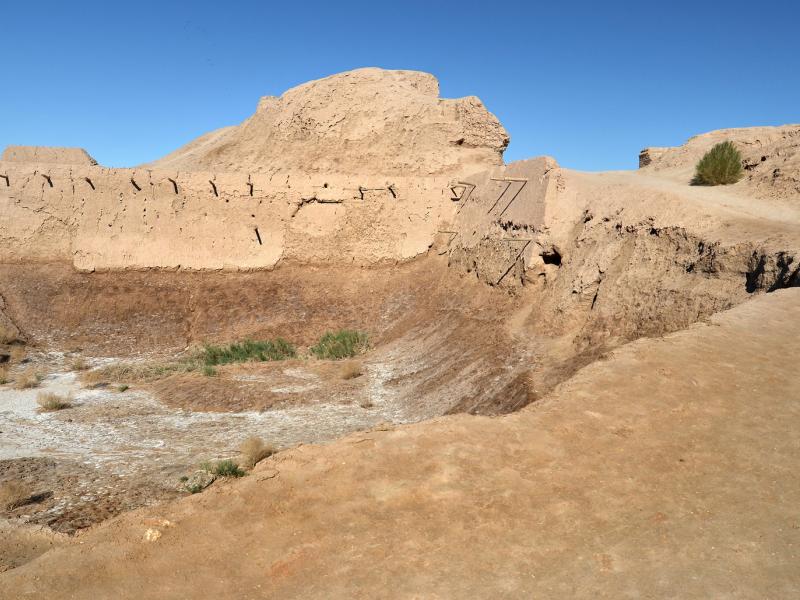 The ancient settlement Toprak-Kala is an outstanding monument of culture of Khorezm in 1-6th centuries A.D. The capital of Khorezm was here in the 3rd century A.D. Toprak-kala was discovered by by the Khorezm expedition under the guidance of S.P.Tolstov in 1938. According to the plan, the city had a form of a correct rectangle. The palace of the governor - a huge castle with three towers- was located in a northwest corner. The fire temple was in the south east from the castle. A long street dividing the city into two parts led from the fire temple to south direction. Lanes departing from it separated massive houses-blocks, forming the capital of the late slave-owning Khorezm. Built in the 3rd century, the fortress was used as the residence of khorezmshakhs - governors of the country- up to 305 A.D. Numerous aggressive wars forced the governors to leave the residence, and the city gradually fell into decay.

Archeologists also discovered workshops manufacturing bows that made Khorezm famous. The architecture of the monument is a remarkable sample of town-planning and fortification art of ancient Khorezm. The governor’s palace with three towers is of particular interest. Three grandiose towers with rooms inside mounted 30 metres up, their height of 25 metres today is an evidence of advanced level of architecture development in Khoresm. However the Toprak-Kala is famous not only with its unusual architecture but also with unique finds in ancient Khorezmian language, discovered at four building in the south-eastern part of the palace. Archeologists found 116 documents written with black ink on wooden plates and on leather rolls. Eighteen wooden documents remained in a very good state. Though documents are not completely read yet, their nature is already defined. These are economic documents from the palace archive. Three of the found documents had precise dates - 207, 231 and 232 AD.

Along with the archive, sculptures and painting also attract interest. It is not without reason that Toprak-Kala is named a museum of the fine arts of Ancient Khorezm. It is the unique completely dug out monument of architecture of Khoresm. The sizes and genius of an architectural design make Toprak-Kala one of the most unique monuments of Khoresm.