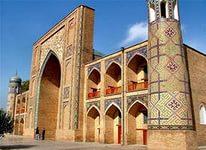 Madrasah Kukeldash close to Su bazaar in the historic part of Tashkent. Built in 1570 it was part of an ensemble of the city's main square. The initiator was built hokim Dervish Khan - vizier of Tashkent khans dynasty Sheibanids nicknamed "Kukeldash", which translates as "milk brother". Thus, the Dervish Khan was the foster-brother of the khan. In the XVIII century. In madrasas arranged caravansary carriageways for merchants,  but  then  came down with his crowning the tower - guldasta. In the XIX century the  madrasas served as a fortress of Kokand khans. Until 1865 madrasah Kukeldash served as a place of public execution: from the top parapet of the central portal on the ground lined with stones thrown in the bags found to be unfaithful wives in order to strengthen people's morality. Today the restored madrasas is the current madrasah and fulfills its direct functions: live here and train students. Also, here come the faithful for Friday prayers.