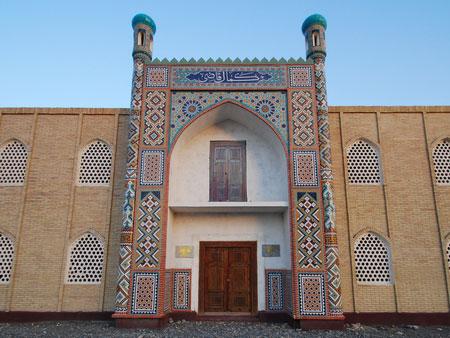 One of the Kokand attractions is the Kamol-Kazy madrasah, built in 1830-1832, in classical traditions of Kokand architecture.

This small building is located in the west of the Jami complex. In the mid-XIX century the Kamol-Kazy madrasah functioned as Muslim institution of higher education for the children of the local nobility and consisted of a classroom – darshona, housing accommodation – hujras and mosques-ayvan.

Like other monuments of medieval Kokand, the madrasah entrance portal only featured rich finish and side cylindrical towers decorated with colored tiles and majolica in the geometric style, Arabic inscriptions and dome lamps. The entire Kamol-Kazy complex is built of baked bricks.

Behind the entrance portal there was the darshona under a tetrahedral dome. The one-storey khujdras surround a square courtyard (20x20m), occupied by ayvan mosque with four columns and entrance leading to the east. The interior design of the Kamol-Kazy madrasah is decorated with ganj and hand painting.