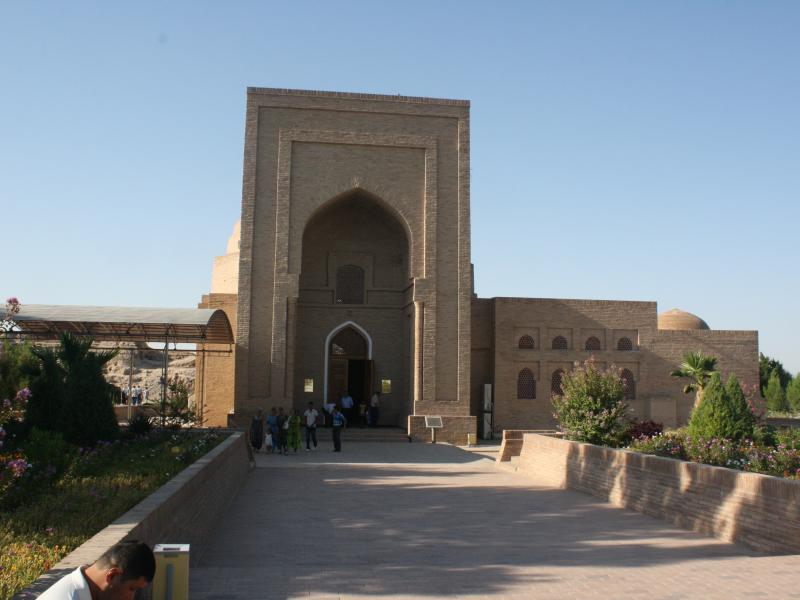 Cult-memorial complexes have been preserved in Termez, which are considered to be holy graves at present too. The main holy place of Termez is the Mausoleum of Hakim at-Termezi, a well-known theologian of the IX c., considered to be as a sacred protector of the city. He was the author a number of compositions of a mystic-philosophical character and was the founder of the dervishes order. "Hakimi" is considered one of the twelve sects of mysticism.

He was buried near the citadel of medieval Termez, probably near to hanaqoh. Later, a mausoleum of baked brick was built above . It had one chamber with a portal dome. The dome was carried by four strong arches and supported by corbel-cell sails. The entrance was on the south side; the northern archway was open and the remaining ones were blocked off. At the end of the XI c., the interiors of the mausoleum were richly decorated with carved ganch. It bore an inscription of the name of the client and also the governor of Mawarannahr, Abdal-Muzzaphar Ahmad Tij. Bright and attractive vegetable, and epigraphical ornaments were used here. To the north of this mausoleum, in XI-XII c., was built a funeral prayer mosque in the form of a three-domed gallery. The archways opened onto a small courtyard paved with brick.

To the mausoleum it was open by means of an arch from which one can see the gravestone, which was placed one and half meters higher than the level of the floor. In the centre of the western wall of the mosque, which was a continuation of the wall of the mausoleum, was built a mihrab faced with baked brick and decorated with calligraphic writings. The remaining surfaces of the wall, arches and domes of the interior were also decorated with carved ganch. Judging by the character of the carving, which is similar to the decor of the palaces of the governors of Termez, the decor of the mosque was dated from XII c. A new small mausoleum was built in 1389-1390, according to the inscription on the portal. It was situated on the east side and was adjacent to the ancient tomb.

The dome of this square building supported in the corners by three-vane sails. Attached on the Eastern side were a group of storage rooms. At the beginning of XV c., under the rule of Khalil Sultan, a grandson of Amir Temur, (1405-1409) on the east-west axis of the mausoleum there was erected the largest building complex. This was the largest building hanaqoh a house for wanderers, dervishes and faqihs with imposing artwork in the dome and two portals located on the north and south longitudinal axis. Let us note that two-portal hanaqoh was rare in Central Asia. The plan showed that the square-domed hall on two sides joined portals a deep-arched bay. The interior hall with clear constructions and decor made with brick kept the spirit of the earliest structures of Termez. The wall with deep arches on the axes bears the octagonal tiered arched sails on which there was a single dome. In the interior remarkable angled three-quarter columns supporting the heel of the arches. Their unique original bases as a prism with cut angles creat the impression that these ribs have been put diagonally on brick cubes, as it was done in the earliest mausoleum complexes of Sultan- Saodat.

At the same time with the construction of the hanaqoh of the mausoleum of Hakim at Termizi, there was set up a carved marble gravestone (sagana), which was a great work. The main rectangular block was set up on a flat pedestal crowning the little longitudinal block of the arched contour. The gravestone was covered by sKiflul artwork carvings of epigraphic, vegetable ornament and very beautiful stalactite rods. The decoration of the corners of the wall facing the hall of the funeral prayer mosque is of great interest. Cut on it were architectural details the sides of the arched bay wer by stalactite forming a mihrab. There were small places that depicted lanterns on chains. The monumental calligraphy of the main block of the gravestone was.unusually refined. This gravestone was considered to be one of the masterpieces of stonework and design art of the masters of the Temurid epoch.