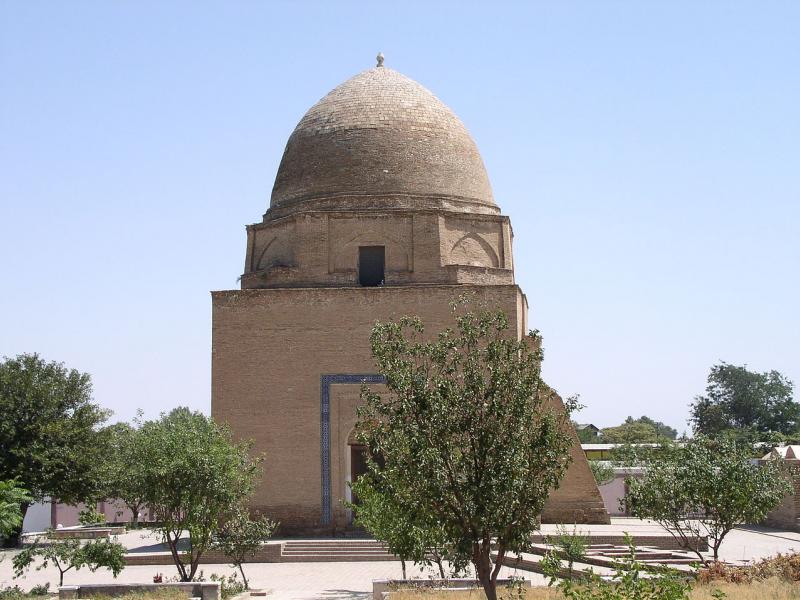 The Rukhabad Mausoleum, built by order of Amir Timur in 1380, was erected over the grave of Islamic theologian and mystic Sheikh Burhaneddin Sagaradzhi, much esteemed by Timur’s contemporaries.

Burhaneddin Sagaradzhi significantly contributed to make Islam widespread among the nomads of Eastern Turkestan. The Islamic scholar, who was married to a Chinese princess, enjoyed great influence at the court of the Yuan dynasty in China. The exact date of his death has not been established, but it is known that he died in China. After the death, according to the Sagaradzhi’s will, his son Abu Said brought his remains to Samarkand.

The Sheikh’s name, surrounded by a halo of sanctity, was given to the mausoleum - Rukhabad – “Resident spirit”. Non-typical for that time, this one-dome construction without entrance portal is built of brick and looks very modest in comparison with Gur-Emir and Ak-Saray, located near it.

The arched octahedron with windows along the principal axes is supported by a cubic basis, and crowned by a spheroconical dome structure. According to a legend, the dome has an immured box with seven Prophet Muhammad’s beard hairs, which belonged to saint Sheikh.

The mausoleum has three entrances from north, west and south. The interior decoration of the mausoleum is also very modest - perhaps its only decoration is a two-meter ceramic plate in the wall foundation with inserts of glazed bricks laid in a form of a narrow band. There are simple tombstones of Sagaradzhi, his wife-Princess and 9 children.