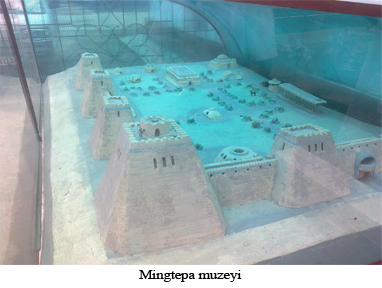 Fergana Valley is one of the most ancient historical and cultural regions of Central Asia. The Chinese sources of 2nd-1st centuries BC describe in detail the rich and populous country of Davan (today the Fergana Valley). According to the Chinese sources, Davan had more than 70 cities; the capital city of the state was Ershi. It was a great commercial city on the Great Silk Road. People of Ershi were noted for their skills in the trade.

Davan State with the center in Ershi was described as a country of developed agriculture. Next to Ershi there were plenty of vineyards. Local people manufactured wine, which was stored for many years. Farmers grew alfalfa (in Chinese "Mu-su"), which was mainly exported to China.

Fergana horses were in particular demand. Argamak horses were the most famous. This breed was the object of desire of the aristocracy in neighboring countries. The Chinese especially dreamt of these "blood-sweated" horses. They considered them the "heavenly horses", which could reach at the gallop the "country of immortality”. In China, people devoted poetic odes to these horses. It came to that in 104 BC the huge Chinese army attacked Ershi to expand their territory as well as to get heavenly horses.

During the Turkic period in the Middle Ages, Ershi was renamed to Mingtepa. Mingtepa was gradually falling into decay. Reduced trading activity on the Great Silk Road as well as numerous conquests caused to the decline of the city. Over time, people have moved and built a new city on the site of modern Andijan. Today, the ruins of the Mingtepa settlement are 30 km from Andijan.