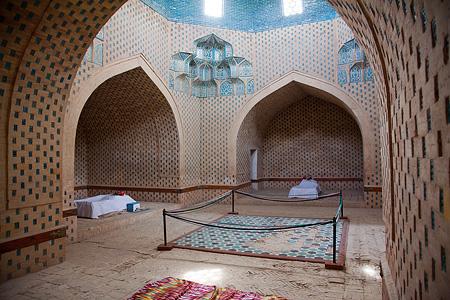 Among various architectural monuments of Ancient Khorezm, special attention should be paid to Maslumhan-Sulu mausoleum. The beginning of construction of this mausoleum dates back to 12th century. The mausoleum attracts travellers from all over the world not only with its unique architecture, but also with an amazing and at the same time tragic legend connected with its construction.

The legend says, that long time ago, the governor of Khoresm ordered the young architect to construct a building which would fully reflect the greatness of the governor after his death. The architect started working assiduously, but once he saw a maiden with whose beauty neither the sun nor the moon could unsurpass. He fell in love with her, but she could not love back because she was the daughter of that governor. When the architect finished the construction of the building, he confessed about his feelings, but the proud beauty severely rejected it by saying that she would fall in love with him if he jumped off. Without any hesitations, the master fulfilled the order of his beloved and died. Only then the maiden understood the strength of his love and committed suicide in despair. So the legend says.

Maslumhan-Sulu mausoleum is not simply a monument of architecture, but also a magnificent example of what a man is ready to do in the name of love…