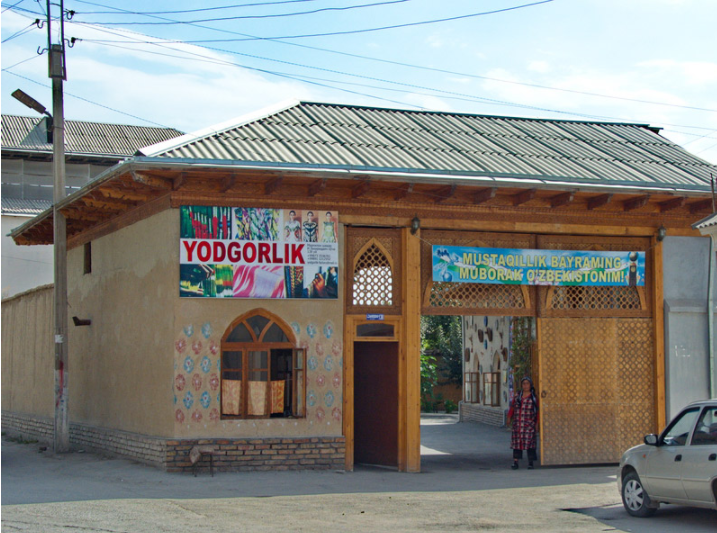 Margilan is one of the most ancient cities of Uzbekistan. It is situated in Fergana Valley on the intersection of ancient trade routes. The city was well known already in antiquity because it made the best silk in Central Asia, able to compete in quality and beauty with that of Chinese one. Caravans with Margilan silk tailed to Kashgar, Bagdad, Khorasan and even to Greece moving along the Silk Road.

Silk comes to Central Asia in the middle of the II millennium with the beginning of the Great Silk Road development. A legend has it that a Fergana’s ruler ordered his servants to learn secretly the silk weaving know-how from Chinese masters, and this caused a war to release between the two countries.

Uzbek khan-atlas is almost completely handmade. Almost over 4,000 years the Fergana masters managed to develop their own unique technique and technology of thread unweaving from a cocoon and yarn dying, which make the Margilan silk one of the best in the world. Two silk factories were set up in Margilan. One of them is the largest enterprise producing “Khan-atlas” in Central Asia. The factory produces daily up to 2.5 km of fabric, which is in demand world-wide. The whole silk production process is computer-aided. Up to date there is the only factory which preserved a manual method of silk production and this is “Yodgorlik” Margilan Factory.

The factory was established in 1972. Today the factory’s staff numbers about 450 people, the majority of them is women. Every month the factory produces up to 6,000 m of fabric including natural silk and half-silk fabric. The Uzbek silk bears justly a name of khan-atlas – “king silk”, which depending on the manufacturing method is divided into several kinds. This also includes such fabrics as shokhi, bekasam, adras having silk yarn in their base.

The visitors of the factory will be able to watch with their own eyes the whole silk manufacturing process and also buy various silk fabrics and half-silk fabrics.

Please find here the article of Stephanie Mitchel, our tourist, who explored Fergana valley and Yodgorlik silk factory in August 2015. The article was published in May/June edition of the Handwoven magazine.