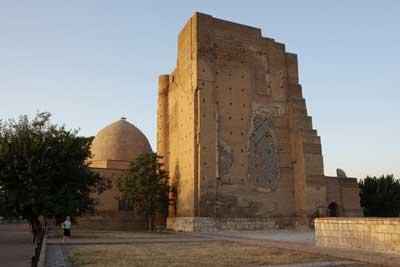 Alongside with the construction of Ak-Saray palace, in 1380 they started building one more monumental construction – Dorus Saodat complex. Of this complex there survived to our days only two constructions: Jahangir’s mausoleum and crypt for Temur, where he was never buried. A dismal event motivated Temur to start building the memorial complex. In 1376 his eldest son Jahangir, whom the ruler loved dearly and intended to make his successor, suddenly died at the age of 22. The citizens of Samarkand moaned the loss of the crown prince – “a fair prince, a gallant warrior who flashed by on the earth like a rose”. After the death of his beloved son, Temur himself gave way to an overwhelming grief.

The body of Jahangir, who died in Samarkand, was brought to Shakhrisabz – the hometown of his ancestors, where he was buried on the family graveyard on the ancient Shakhrisabz town territory. To all appearance, it was then that Temur arrived at an idea of building a mausoleum for himself and his descendants. But only four years later, after his military campaign to Khorezm was completed, the construction of the burial complex started in Shakhrisabz. Above the grave of the crown prince there was erected a mausoleum, with an adjoining madrassah, which became the philosophical and spiritual centre of the complex. The name of the complex itself – Dorus Saodat – can be interpreted from Arabic as “Precept of Power”. The madrassah hasn’t survived; according to Arabic historian Malikho, it was destroyed in the 17th century by orders of Abdullakhan.

During the excavation works on the territory of Dorus Saodat complex it was discovered that Jahangir mausoleum was abutted on the east by ziaratkhona – the room for commemoration. To the south of the mausoleum there was discovered a portal niche of the madrassah with the arch span exceeding 20 metres. Through the portal a passage led to the courtyard of the madrassah containing the remains of khujra walls. Deep aivans with sufas to sit on opened to the yard. The stone slabs once paving the aivans niches and portals survived to the present day. Dorus Saodat madrassah was initially intended not for teaching but for performing religious and memorial rites. Vakf (property donation) documents of the madrassah included estates, mansions and gardens. The revenues generated on this property had to be used for maintenance of dynasty burial. According to Ruy Gonzales de Clavijo, madrassah and mausoleum of Jahangir were richly decorated with gold, azure and tiles. There was also a garden with pools here. In 1394, Umar Shekh, the second, 29-year-old son of Temur perished during the siege of Kurd fortress in Iran. His body was brought to Shakhrisabz and buried in Dorus Saodat complex. Every day, by the special order of Temur the meat of twenty cooked sheep was brought to madrassah for commemoration of his sons buried in the complex.

At the same time Temur ordered to construct a mausoleum for himself, but it remained unfinished. In 1404 he inspected the construction and was rather dissatisfied with the result. He found the entrance to be too low and ordered to rebuild it. This mausoleum has not survived. However, on the basis of historical documents as well as the results of archeological research, on the territory of Dorus Saodat complex there was found Temur’s crypt. This is one of the most remarkable and majestic construction of Amir Temur’s epoch. Judging from the records of Temur’s contemporaries, the resplendent sumptuous decoration of above-ground construction contrasted with the unpretentious décor of the underground crypt. Coming down the steep staircase on the southern side of the mausoleum one finds himself in a small room (less then 40 square metres). The walls, floor, and domed ceiling with supporting arches are made of slabs of light-grey marble-like limestone. In the centre of the room, embedded in floor, there stands a marble sarcophagus. It is covered with a huge, monolithic marble gravestone, which is 11 centimetres thick, with 5 iron rings being attached at the corners and in the middle. On the walls, arch rings and medallions there are carved in sulus script quotations from Koran and inscriptions which read as follows: “The Command belongs to Allah alone. He is Eternal”, and “In Allah’s hand is all Good, over all things He has power." The fate willed it that the body of Sakhibkeran Temur should be buried not in the crypt of Shakhrisabz, but in Gur-Emir mausoleum in Samarkand.