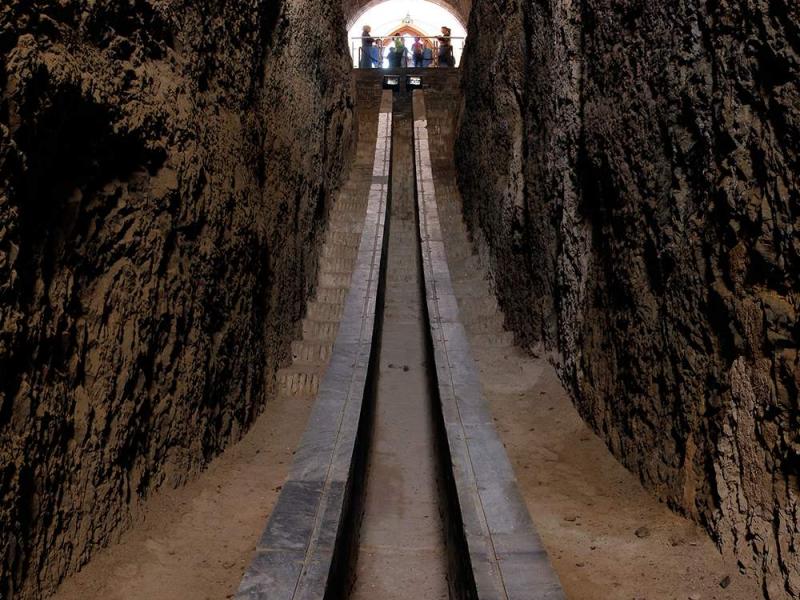 Among historical monuments of Samarkand observatory takes particular place, constructed by Ulugbek in 1428-1429 on one of the hills on height, at the bottom of Chupanata altitude.

By Babur’s words, which saw the observatory, it was three-storied covered with beautiful glazed titles building of round form 46 meters in diameter, 30 meters in height. In the main hall huge instrument was placed for observations of Moon, Sun, and other stars of the vault of heaven.

Observatory was unique construction for its time.The basis of observatory was giant goniometer vertical circle), radius of circle was equal 40,212 meters, and the length of arc was 63 meters. The main instrument-sextant was oriented with amazing exactness by line of meridian from south to north. Test establishments of modern astronomers Kastalsk and Sheglov are the evidence to it. Sizes of the main instrument, lucky construction, scientific knowledge of Ulugbek and his companion-in-arms provided amazing exactness of astronomic observations. "Experience had known about planets movement, is delivered for keeping to this book" - Ulugbek was writing. In this work basics of astronomic observations are summarized, made by east scientists.

Exactness of observations of Samarkand astronomers is amazing because they were made without help of optical instruments, with unaided eye. Astronomic tables contents coordinates of 1018 stars. His catalog did not lose its value in our days. With amazing exactness made the calculation of the length of star year, which by Ulugbek’s calculation is equal to 365 days 6 hours 10 minutes 8 seconds. Actual length of star year by modern data is 365 days 6 hours 9 minutes 9,6 seconds. Thus the mistake is only less that one minute. After Ulugbek’s death observatory was destroyed and robbed by religious fans. Only in 1908 archaeologist Vyatkin found first document where location of observatory was mentioned. Unfortunately only underground part of sextant and basis of the building were saved. By found documents scientists made the model of the observatory.

Remarkable scientific center was destroyed, valuable library was plundered, and scientists were chased away. Sheikhs announced the hill as the place of grave “Forty virgins” and built here mausoleum, place of pilgrimage, bringing big profits to hypocrites. Like this Samarkand priesthood was trying to suppress in people member of torch of science-Ulugbek and his observatory.